Inflation is driven by many different factors and each one impacts households differently. Only last year one of the biggest contributors was used car market prices responding to delays in manufacturing new cars. While the impact from higher used car prices on most households is generally minimal, the latest data from the UK indicates a broadening out of inflationary pressure.

Drilling down into the components driving inflation, one of the biggest contributors is energy, and more specifically the cost of electricity. Unfortunately, while households may defer buying a second-hand car, they need heat and light and deferring is not an option. As we will show later, electricity price pressures are going to stick around and most likely for longer than is comfortable for the Bank of England wanting to bring inflation under control.

In the UK the most recent annualised inflation reading show prices rising on average by 5.4% in December, the highest since 1992. This is ahead of the forecast rate of 5.2%.

With inflation proving sticky, pressure is mounting on the Bank of England to respond. More rate rises are being pencilled in but tightening monetary policy will do nothing to offset rising household energy costs. Regardless of what monetary policy provisions are brought forth today electricity prices are expected to triple in April.

To understand why electricity prices are problematic we need to understand how the system operates. Currently, there is a cap on the rate energy suppliers can charge per unit of electricity. This protects consumers against unfair pricing, and it allows a limit to be set by electricity regulator Ofgem. The cap is based on the wholesale value of energy and is updated on a bi-annual basis. In April this year the new maximum will be recalculated again, and it will rise in line with significantly higher wholesale energy costs i.e triple. 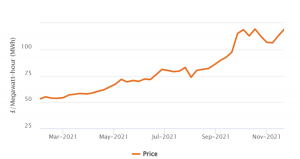 To get some sense of the impact of electricity prices on inflation you need to consider the composition of the inflation basket i.e. the so called mix effect driving inflation. In the chart below inflation is forecast to peak in April at around 6.5% in the UK. However, it is very evident from the mix that not only is energy (energy and motor fuel) the largest individual contributor, but its elevated level also persists through until at least 2023. 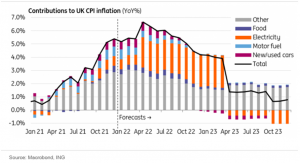 With inflation rising more broadly, policymakers are under great pressure to utilise all weapons in their arsenal to try and dampen the effect on households. The number of homes under “fuel stress”, who are spending at least 10% of their income on energy bills, will rise to 6.3 million this year. A jump from 9% in January to 27% of households in April. Consequently, Bank of England officials are already weighing up another interest rate hike as early as next month.

The higher inflation environment is by no means exclusive to the UK. The latest inflation figure in the USA is an eye watering 7%. This carries very similar concerns for household budgets, and it is fuelling higher wage demands to help keep up with prices. In the US evidence already exists that a large proportion of lower earners are benefitting from higher wages; an outcome based on labour shortages in several key sectors.

With wages and prices rising, interest rates in the US are also expected to increase. At least 3, possibly 4 rate rises are expected this year.

In China, President Xi Jinping gave warning to the US and Europe this week saying increasing interest rates could “slam the brakes” on the global recovery. Although raising interest rates carries some risk to the growth outlook, Western central bankers have previously indicated that inflation is a lagging indicator. They want to look through the cyclical and transitory elements of inflation and to focus on their objective of keeping prices stable. However, it does look as if there may be an uncomfortable period for them if inflation persists at a higher level for longer. This would make it seem as if policy is lagging if interest rates didn’t rise higher than currently predicted.

Inflation in the UK and US is higher than many expected with inflation forecasts constantly being exceeded. Higher prices seem likely to stick around for longer, especially electricity prices in the UK, but we are probably getting close to peak inflation.

Central banks are responding by tightening policy. However, interest rates are rising from a very low base and not seen as threatening demand. Central bankers want to curb inflation not derail growth; they remain hopeful that current supply side issues causing inflation (blockages and shortages) will ease as economies reopen.

Governments, always keen on remaining popular, are actively looking at options to reduce the impact from higher goods and services prices. Especially items that are required to meet basic needs. There is a focus on those who are most affected- the lower paid.